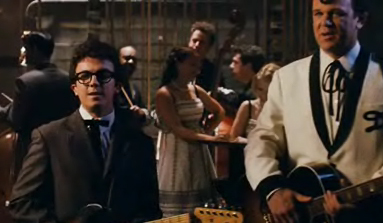 As we exclusively reported previously Frankie Muniz will guest star in the film which has finally settled on the title Walk Hard: The Dewey Cox Story. As it had not been reported elsewhere till now we thought he may have been cut. However he’s not and can be seen in the trailer as Buddy Holly! He’s a guest star so its not a major role, but the film looks great.