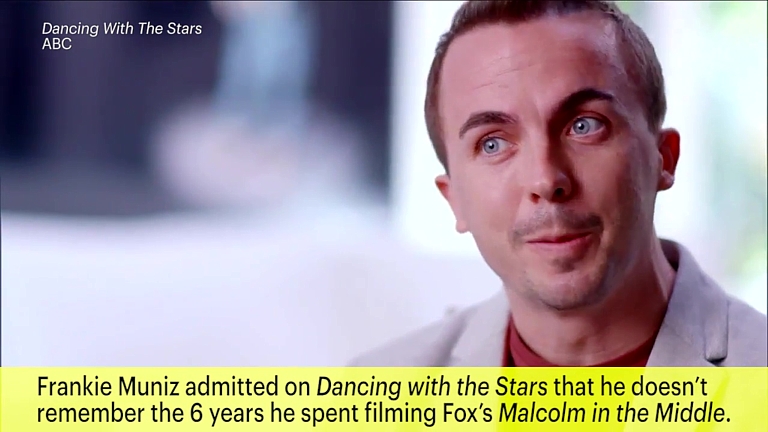 He revealed he doesn’t remember a lot from Malcolm in the Middle due to mini-strokes and concussions.

As was reported in Entertainment Weekly and People Magazine some months ago, Muniz revealed before performing on Dancing with the Stars that he can’t remember most of the things he’s experienced in his life, including his six years on the Fox comedy Malcolm in the Middle. He said that he’s suffered nine concussions and several mini-strokes, or transient ischemic attacks (TIAs), but he can’t say for sure what prevents him from recalling the past. “It makes me a little sad,” Muniz said on the show. “Things pop back into my mind [that] I should have remembered.”

“Since 2006, I’ve broken 38 bones,” says Muniz, who has also endured nine concussions since the age of 7. “As a kid I did everything. I played ice hockey, soccer, basketball. But a year ago I went roller skating, and I was literally the dad holding onto the rail. I realized I have to take care of myself.”

In 2009, Muniz had a serious accident on the race track: “My car flipped a bunch and I crashed into a wall. In the end, I broke my back, ankle, four ribs and my hand. My thumb was dangling by the skin.”

In 2012, he suffered his first mini-stroke, during which blood supply to the brain is temporarily cut off. (Unlike a stroke, there are no lasting effects). Since then, Muniz estimates he has had 15 mini-strokes, varying in frequency and length.

“I’ve gone to so many neurologists who have done every single test,” he says. “I have no answers as to why it happens. I got so tired of trying to find an answer that I don’t think I’ll search for an answer anymore. I’ve accepted it.”

However, in an interview with Malcolm France in early December 2017, he made clear that his condition shouldn’t be overdramatised. Muniz said that he started rewatching all 151 episodes of MITM with his girlfriend Paige, and talked about his childhood with his mother a lot to regain some recollections of the events he forgot.

“I couldn’t believe how little I did remember filming (…). More of my memories have become, like, watching the show, my memories of the show have become what I see on TV, or the stories I read, or if I see pictures, but they are not necessarily in my brain, if that makes sense. Obviously there is so many things about Malcolm in the Middle that I could never forget. It may have been taken out of context a little bit, that I forgot everything, if that’s what they’re saying. I definitely didn’t forget everything. I forgot a fair amount, but definitely not everything.”

In the Dancing with the Stars interview, Muniz concluded on a positive note: “My most memorable year is 2017, because I’ve learned to live in the present. I’m happy with my acting career, I’m happy with the decision I made to go race cars and to focus on music. Even if I don’t remember it all, I’m happy.”