You Hang Up Relaunch Website, Gear Up for Debut Album 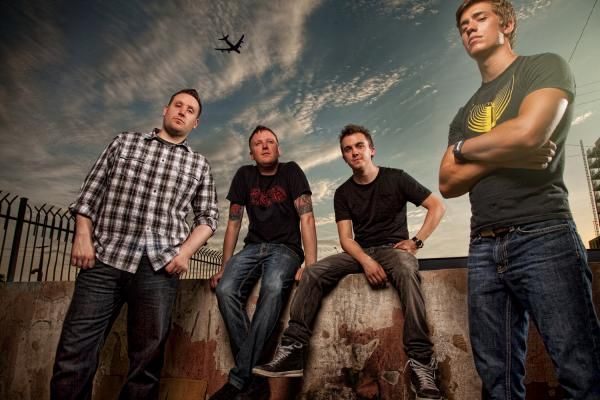 Frankie Muniz’s band You Hang Up have recently relaunched their website and continue to prepare for the release of their debut album.

On the new site, you can listen to samples of tracks from the new album and there’s even a new email list you can sign up for to get updates on the band.

Hey Everyone,
Check out the sneak preview of our upcoming release, we put together short clips of 4 different songs that will be featured on the new disc. We can’t wait for you guys to hear it. We’ll also be announcing a whole bunch of shows in the near future…stay tuned

Take a look at their new website, sign up for the newsletter; and you can also check out the material they’ve already released on iTunes and on Amazon (US, UK, affiliate links).

The two most striking facts about Phoenix, AZ, rock band YOU HANG UP can be learned within the first five minutes of meeting them.

First, and most obvious, is the fact that the man behind the drum kit is a stranger to no one. Prior to assuming the throne for YOU HANG UP, Frankie Muniz was already a household name as an actor, most notably from his time performing the title role of “Malcolm” in the beloved sitcom “Malcolm in the Middle.”

Second, and perhaps more impressive, is the fact that YOU HANG UP’s music is so honest, catchy and genuinely impactful that any novelty of a celebrity playing in the band is immediately overshadowed.

What matters to the members of YOU HANG UP are not the benefits (or, let’s be honest, detriments) of having a famous drummer, but the band’s melodic, driving and sharply poignant songs, whose pop immediacy and unbridled emotion are matched only by their anthemic power. “YOU HANG UP is all about the music,” explains singer/guitarist/primary songwriter Aaron Brown. “We do what we do because all four of us have a passion to write great, gripping and just all around fun music.”

That passion will be captured in its full glory on the band’s debut full-length album, due out later in 2011. The album was recorded by super-producer Joe Fitz, whose credits include B.o.B’s Grammy nominated The Adventures of Bobby Ray. “Working with Joe has been a great experience. He is an amazing guy personally and professionally,” Muniz says. “The whole tracking process was a lot of fun and very grueling at the same time. We were tracking pretty much 24 hours a day. Every part of the experience, even the stressful ones, were amazing.”

YOU HANG UP began as a solo project for Brown in 2007. After releasing an EP on which he played every instrument himself, Brown realized it was time to surround himself with equally passionate musicians who could bring his vision to fruition. A few lineup shifts later, the current version of YOU HANG UP was assembled. Since then, says Muniz, it’s been a bit of a fairy tale experience. “It has been amazing. We’ve already established some die hard fans across the world. We already have some great tour stories and nightmares, but overall, it’s just great to have such a positive group of guys that are all on the same page musically.”

It’s easy for people unfamiliar with the band’s music to reduce YOU HANG UP to “the band with Frankie Muniz on drums,” or to saddle them with the preconceived notions. But, Brown says, that same group of people can be the most satisfying to win over. “We always say that our favorite reaction is, ‘I was NOT expecting that at all!'” he says, “Most people are expecting our performance to be a complete trainwreck. But we work hard at creating great music and a great live show, and we hold our own. It is a great feeling to win over new fans.”

To see is to believe.