Linwood Boomer & the Origins of Malcolm 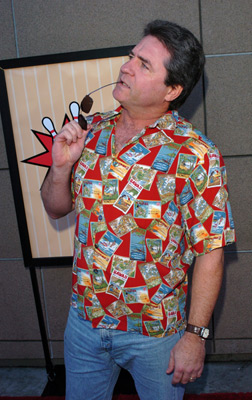 As most readers know, Linwood Boomer is the creator and main writer on Malcolm in the Middle (if you didn’t, even more reason to read on). Not only that but its partly autobiographical especially in the earlier seasons. However details on this are not widely known, so when I stumbled across John Murphy’s post it was a nice read. John went to school with Linwood in the early 1970s and references a 2006 interview with Linwood. Surprisingly Linwood’s experiences where grimmer than Malcolm’s.

At Serra, Linwood was a gifted-but-troubled kid who was on the periphery (read: outcast.) A San Mateo Times story recalled how classmates (or was it a teacher?) dubbed him “Mary” due to his shaggy hair….Linwood hung out in high school with other guys on the fringe. Their hair was a little longer and their clothes a little out of the norm. They were cynical; Linwood described himself as “anti-social” in high school. – John Murphy

Boomer says Malcolm is based on him, but the character is much more well-adjusted than he was in high school.

“I was more self-centered and antagonistic, so basically I took a belligerent jackass and turned him (Malcolm) into a charming eccentric,” Boomer says. “I was a troubled kid with very few social skills and did not connect to the people around me. I was not a sociopath, but I wasn’t social. I was always telling the principal he was stupid and arguing with my teachers. I would be horrified if my children ever did that.”

The full interview below is a must read.

If you live in the Highlands area of San Mateo and saw a strange man in your front yard, peeking over your fence, we hope you didn’t call the police.

Just last week, when the sun finally showed its face for the first time in ages, “Malcolm in the Middle” creator and producer Linwood Boomer was in San Mateo, cruising his old neighborhood and peeking over the fence to see his old backyard.

“I took my wife and my 12-year-old son and 2-year-old to see it,” Boomer says from his office in Hollywood. “The people were home, and I was going to knock at the door and tell them that I used to live there, but I chickened out.”

He drew upon his memories of living in that house to create the off-kilter family on “Malcolm in the Middle.”

The series shows the home as slightly rundown, so Boomer says his family was a bit taken aback when they saw the tidy neighborhood.

“They were surprised it wasn’t a slum, because of the way I talk about it, but no, it’s just a normal suburb,” Boomer says. “My childhood was not super-happy, so my memories and stories are colored by that, but we were not living in a slum.”

The Canadian-born actor went to Highlands Elementary School, where he was deemed “gifted” and put into special classes. He says that experience is what drove him to write about Malcolm, a gifted young man in a low-achieving family.

“My mom would never tell me what my IQ was, so when I wrote ‘Malcolm,’ I said his IQ was 165,” Boomer says. “My mom then told me that mine was never that high.”

Boomer says he grew into an antisocial teen, first attending Junipero Serra High School, a Catholic school he refers to as a “football for Jesus” type of school.

“It may have changed,” Boomer says. “But when I went there (1971- 72), my hair was about as long as Frankie Muniz’s is now (slightly shaggy), and I was given the name Mary because my hair was so shockingly long.”

He switched to Aragon High School for his junior and senior years, graduating in 1974.

Boomer says Malcolm is based on him, but the character is much more well-adjusted than he was in high school.

“I was more self-centered and antagonistic, so basically I took a belligerent jackass and turned him (Malcolm) into a charming eccentric,” Boomer says. “I was a troubled kid with very few social skills and did not connect to the people around me. I was not a sociopath, but I wasn’t social. I was always telling the principal he was stupid and arguing with my teachers. I would be horrified if my children ever did that.”

Boomer says he decided early on to cop to his past to his children.

“I couldn’t hold myself up as an example of anything except persistence and the ability to change,” Boomer says. “I talked about the stuff I did as a kid and told them to do better than me, behave better and be better than me.”

In the series finale of “Malcolm in the Middle,” Malcolm is named valedictorian of his graduating class.

When Boomer graduated, he didn’t even get a diploma.

“Instead of the certificate in a covered leather booklet, I opened it up and there was a notice saying that I owed the library $23.40 for an earth science book I lost,” Boomer says. “I paid my bill — I was working at Macy’s at the time and making good money, so it wasn’t that — and eventually got my diploma.”

Boomer bolted out of San Mateo and never looked back. He began his acting career on “Little House on the Prairie” as Adam, the husband of eldest daughter Mary, and began writing for TV after that series ended. After a relatively short career in front of the camera, Boomer began writing for TV and eventually sold “Malcolm in the Middle” to Fox.

“I never went to any high school reunions. I just kind of didn’t stay connected to the people there,” Boomer says. “When I moved (to Los Angeles), my grown up life started so quickly and my home is here now. But it was really interesting going back.”

During his recent vacation to San Francisco with his family, he decided it was time to go back to his old haunts.

So did he stop?

“Well, I would have, but when you have a 2-year-old napping in the backseat, you like to keep them doing that,” Boomer says. “If it had just been me and my son, I would have. So I guess I’ll have to go back.”

He’ll have time to do that now that the series has wrapped. Boomer says he even put himself in a cameo for the end.

“The work has been a very pleasant experience. The actors are level-headed and not prima donnas, the writers aren’t lazy and the scripts are always on time and the crew always prepared, so it has been uncommonly pleasant to be part of this series,” Boomer says. “But I’m 50 now, and less inclined to take on the work of a series.”

For a while, he says he’ll just be sitting in his back yard or driving the kids to school, and if an idea hits him, he may do another series.

“I like the job, working in television is easy money and a fairly pleasant way to spend your day,” Boomer says. “So I’ll never rule it out, but I’m not in any rush.”

But what about returning to acting?

“Well, when I did that little bit in the final episode, I remembered two things about my acting: it’s not really as creatively rewarding to me as writing and, more importantly, I’m not very good at it,” Boomer says. “I knew when I was shooting it, and I really knew when I was editing it. If that guy hadn’t known the director/ producer, and in fact was sleeping with him, he would have been fired.”