I realize this thread is 11 years old, and no one's commented in here for 2 1/2 years, but I just noticed something: 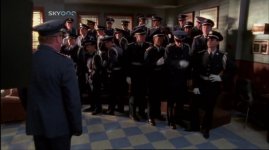 I love this kinda stuff.
W

navinrjohnson said:
I realize this thread is 11 years old, and no one's commented in here for 2 1/2 years, but I just noticed something:

seen this show to death and never noticed that

navinrjohnson said:
I realize this thread is 11 years old, and no one's commented in here for 2 1/2 years, but I just noticed something:

Traffic Jam
When the fart bomb exploded and the kids tried running away, a camaraman is visible in a few of the shots

At the shot when the thief takes a sharp turn into a dirt road, you can't see Dewey in the backseat. Probably like that because the turn was done by a professional driver.

When the family have got back in the car Malcolm says something like "who would have thought a traffic jam could be so cool, we should do this again". Well near the end of the sentence we can see Malcolm's mouth and it isn't moving.

Halloween Approximately
The calendar in the boys' room is on September, when the story is early November (shortly after 31st Oct). However, this may be intentional since when Reese confirms that Halloween is the 31st October, he lifts up the September page.


Lois' Birthday
Lois gives the boys $30 to spend on her present(s). The boys claim that the 3 dumb things they bought, totaled up to $8. later when Francis was arguing with them, he said thet they spent the rest on candy so the candy totaled up to $22. He later says that there was $20 worth of candy.

Dinner Out
When Lois and Kitty Kenarban (Stevie's mom) are at the table in the restaurant, while Hal and Abe sit at the bar, things on the table change position or disappear and reappear between shots. Same thing happens at Malcolm's table with Reese and Stevie.

High School Play
When Lois arrives home and discovers the Lego City still in the living room, she puts her bag on a table and it falls off

Hal Quits
In the scene was Hal and Lois are in the kitchen, talking about different kinds of paint brushes. Lois pours herself some tea. As Hal and Lois head back to their room Lois has the cup of tea in her hand, the door then opens (it's Francis) and when she turns to see who it is the cup is mysteriously gone.

Reese Cooks
When the girl Krelboyne is talking loudly, you can see her mouth barely matches anything she's saying.

During one of Reese's cooking classes, Hal puts some bread into a toaster. It then cuts to a shot of Reese. When it cuts back to Hal, the toast that pops out of the toaster isn't the same shape as the bread he put in.

Bowling
When Hal goes into the boys' bedroom to talk to Dewey, he is not wearing his glasses. But as he sits down to read Dewey a story, the glasses magically appear on his head seconds before he reaches to get them

The monitor above Hal's lane at the bowling alley reads Lane 15. However, the number above the pins indicates he is actually bowling at Lane 26.

Malcolm vs. Reese
When Reese was throwing things in the boys' bedroom, a woman's hand appeared

When Francis gets pulled over, his window is open and closed between shots.

Flashback
In the Cold Open when the boys are playing baseball on the street, production equipment is visible in the background

When Lois goes into labour with Malcolm, she runs outside taking Francis and Reese with her. When Francis says, "You're a liar, you're a liar," watch the back window of the car and you will see the camera and camera operator's reflection in the window.
Click to expand...

A continuity error is a lapse in the self-consistency of the scene or story being portrayed. The two movie frames shown above, from the movie Love Actually, come from two shots a few seconds apart in the movie, but display a number of discrepancies; the biggest visual discrepancies between the two are shown by the boxes.
M