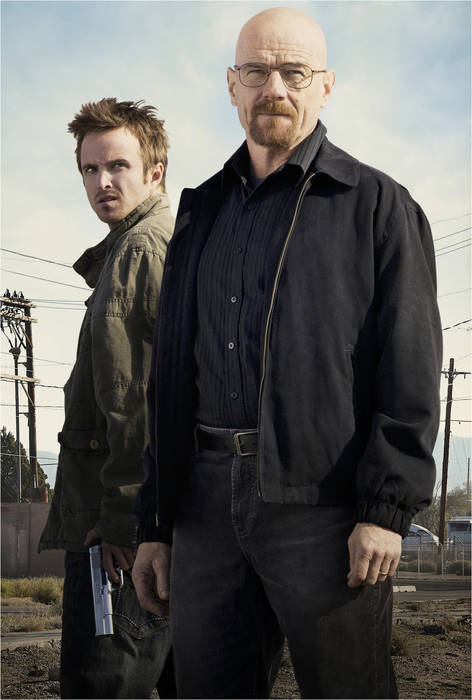 As predicted, Bryan Cranston (Hal) and his new TV show Breaking Bad have been nominated for several Emmy awards.

Bryan is up for Outstanding Actor for the third year running, having won the award for the past two years, but is up against some tough competition — including Hugh Laurie as Dr. Gregory House (House), Michael C. Hall as Dexter Morgan (Dexter) and Matthew Fox as Jack Shephard (Lost).

But it’s not just Bryan himself that is up for a gong, with co-star Aaron Paul up for Outstanding Supporting Actor for the second year running, as well as the show itself nominated for Outstanding Drama. Four other nominations were also announced to various crew members on Breaking Bad:

Bryan Cranston, a two-time Emmy Award winner for his role as a high school teacher turned crystal methamphetamine manufacturer on “Breaking Bad,” learned on Thursday morning he was nominated for a third time in the role. Doesn’t he ever get tired of the recognition?

But why should Mr. Cranston dwell on bygone teenage crushes? Today he’s also celebrating his 21st wedding anniversary (or “50 years in Hollywood,” as he put it).

So does today’s Emmy nomination mean he’s not obligated to get his wife a gift?

“You see, you’re a typical man,” Mr. Cranston told this reporter. “You are such a typical guy, trying to get away with something. And yes, I tried the same thing. ‘Honey, congratulations, here’s a nomination. And a toaster. Sweetheart, what do you think?’ And then she throws the toaster. No, that’s not going to fly. It’s a nice dinner out and a lovely card.”

The third season of Breaking Bad was a relentless revelation. The show that began as a darkly comic fable of a meth-cooking high school teacher plumbed  new depths of moral decay, while simultaneously delivering some of the most spine-tingling thrills on television. (There was also an entire episode about killing a fly.)

At the center of it all, Bryan Cranston brilliantly portrayed the continuing descent of Walter White, and was rewarded this morning with his third straight Emmy nomination for Best Actor in a Drama. PopWatch caught up with Cranston to talk about some of the season’s twists, the trajectory of the show, and the crucial importance of the shaved head.

ENTERTAINMENT WEEKLY: You’ve won in this category the last two years running. Are you excited to go for a three-peat?

BRYAN CRANSTON: It’s funny, [basketball coach] Pat Riley actually copyrighted that phrase, so if it’s used in a show you have to pay him. I’m not kidding. Three-peat was something he uttered and then copyrighted. If you print it up, EW owes him a stipend.

I’ll talk to our lawyers. Was there anything in particular in this last season that really surprised you?

This whole season was about Walt accepting the dark side of his nature, and understanding and embracing the possibility that these thoughts can co-exist in a human being. It’s not mutually exclusive that you could be a murderer and a good father, a husband. That’s a bizarre thing to embrace for me, as a person. I don’t know what that’s like. But trying to get into the psyche of it, in Walter White’s head…He had to fully allow himself to be a crook in order to stay alive.

In the season finale, we saw a brief flashback to many years earlier, with a much younger and very unencumbered Walter White. Was it interesting to explore the character from such a different angle?

Those are always fun to play, because you get to go opposite of what your character is going through. Certainly a welcome thing for me, to say: “Okay, this was before any children, so the mood was lighter. His walk was lighter. He stood more erect. The pressure of the world wasn’t on his shoulders. There was more of a breeziness to him. The air of hope was present.” It was fun to be able to do that. And then you realize, we’re watching a flashback. That’s what was. If he could turn back the clock. ..

Did you have a favorite episode of the season?

The most impactful episode, for me, was the twelfth episode. On an impulse, Walt is going to the street corner where Jesse was determined to kill these two thugs, not knowing what he would do when he got there. He just ran his car into them, and knocked them down, and one was still alive, and Walt just picks up a loose gun and shoots the guy in the head.

Do you think Walt had any idea what he would do when he got in the car?

No. It’s just, “Get there, Get there.” He was just going on a feeling, and he stumbled across a traumatic situation, and just put his foot straight down instead of breaking, you know? That little millisecond of decision, which was, interestingly, off-camera. To give you a little insight into editing, when I played that moment, I got out of the car, went to him, saw the guy was crawling towards the gun. So I picked up the gun right away, but I didn’t shoot him right away. I picked up the gun, I looked at Jesse, I looked around to see if there were any witnesses, I looked at him again, thinking, “What to do, what to do, what to do,” and then I realized the only thing I can do. And then I shot him.
When they edited it together, [executive producer]Vince Gilligan felt that, by not having that moment of indecision, it pushed the character a little closer towards what he’s going to become. That’s the delicacy and the fragility of editing. And I was surprised to see that! He gets out of the car, he picks up the thing, BAM! I jumped when I saw the finished product, I went, “Oh my god! Oh my god!”

That scene added an interesting new layer to Walt’s relationship with Jesse. How do you think Walt views his partner? At times there’s a father-son aspect to their relationship, at times it’s just absolute annoyance.

I don’t think that it’s mutually exclusive to have father-son relationships that are loving and annoyance. [Laughs] You look at what a teenager does, and you go, “Are you kidding me? You’re an idiot.” And certainly Walter White has many of those moments with Jesse Pinkman. Everything about him and Walter are polar opposites. Walt enjoyed education, and thrived on it, and was good at it. Jesse Pinkman was not. Walter loved details and study and the science and how things work. Jesse Pinkman? Looking for shortcuts. What we wear, our references, our age, our likes and dislikes of music, what we deem important, our vices. Under normal circumstances, you wouldn’t have those two together. And that’s the happy accident that we have found. And I say “happy accident” because the Jesse Pinkman character was supposed to be killed off in the first couple episodes.
It would have been a very different show.
Vince saw the lightning in the bottle when he was able to put these two opposites together in a symbiotic relationship and have that be the spark, the fireworks.

Breaking Bad seems like a resolutely un-commercial show, but this past season saw a significant uptick in viewership. Did you expect that?
Not at all. When you hear the premise – a high school chemistry teacher dying of lung cancer becomes a drug dealer, you go “What?!” If I just heard that one line, I would have thought, “Never mind, that’s not going to work.” But I didn’t. What I heard was my agent saying, “Vince Gilligan worked with you on X-Files ten years ago, and thinks you’d be great for this role. He wants to meet you on it. You should read this script called Breaking Bad.” Oh, okay, great! It’s always nice to be thought of. I read the script and didn’t stop for a moment, went all the way through to the end, got on the phone right away, and said, “As soon as possible, get me in to see him.” It was an exceptionally well-written story.

Do you have a sense of what’s coming up in the fourth season?

I don’t. The only thing I know is what we initially talked about, when I had my first meeting with Vince. We’re doing something – it wasn’t his words, but my assessment –something that’s never been done on television: to completely change a character from one type of person to another. That’s never happened in a series. Certain experiences will change how someone looks at things and reacts to them, but to completely change from a mild-mannered chemistry teacher to become a drug kingpin murderer…is it possible? Quite frankly, we don’t know. We have set the hook. The audience seems to relate to Walt and what he initially attempted to do: provide for his family. We understood his plight as a human being, an everyman trying to do what’s right, trying to make a living. And now he’s changing. Will the audience spit the hook, or will they be pulled into the boat? We just don’t know. And that is exciting too. Just like the show itself, the concept of the show is unpredictable. We really don’t know if it will fly. And that’s exciting and dangerous.
As an actor, is that an interesting space to be in: a story with a clear trajectory that could also veer off in any direction?
In the larger context, you have a bracketed overview of where this character is going, and who he’s going to become. There is no road map. We’re finding our way — and when I say we, I mean “Vince.” I know the endpoint. I have no clue how I’m going to get there. And I don’t want to know. I’ve never asked Vince, “Okay, what’s happening this season? Where’m I gonna go, What’m I gonna do?” Honestly, he doesn’t know either! He may have an idea of what he may attempt, but so many things happen, and different characters come into play. The addition of Bob Odenkirk as Saul, Giancarlo Esposito as Gus, and Jonathan Banks as Mike the PI, has changed the tone somewhat, justifiably. It’s such a wonderful thing. Reading each episode’s script is like getting into a really good chapter every night of a book you can’t wait to get to at night. You get into bed, like, “Ahh, what’s gonna happen now?” You look forward to it.

So you’re looking forward to many more years of shaving your head?

As a character actor at heart, I welcome the idea of completely looking this way. Thin, and bald, and now with this Van Dyke facial hair. If people know me as this bald-headed guy, with glasses and the look of consternation on my face, then when I’m not doing that show, I grow my hair back, I completely look different, I can do other things. It’s a way for me to able to hide in plain sight.