Bryan Cranston: ‘My Life in 15 Songs’

In the article, Bryan gives us the ‘soundtrack’ to his life: fifteen songs that have influenced him over the years and that he has found particularly meaningful. 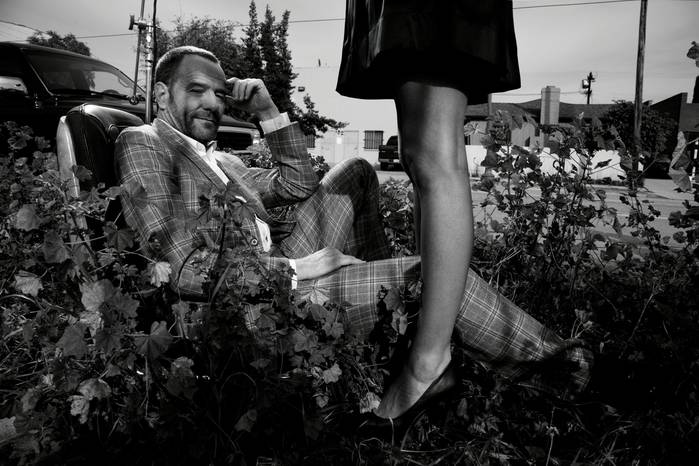 This list is much more than just the songs I like. It is the soundtrack of my life. It pretty accurately expresses how music has influenced and shaped me over the past 54 years. What follows is chronological, not in terms of when the music was produced, but when it mattered to me. So, here it is: my life in 15 songs.

Simon and Garfunkel’s “Mrs. Robinson.” I was popular in grade school, but that didn’t translate to being bold when it came to girls. Carolyn was a beautiful, fun girl who set my heart afire. I needed to ask her out. A graduation party at a friend’s house was my last chance. Paul and Art were harmonizing this song as I watched a new boy in school accomplish in two seconds what I couldn’t in two years. He went right up and asked her out. She said yes, and before the party was over they were making out on the living room couch. I was staggered, hurt and embarrassed. This song takes me back to that vulnerable time.

The Doors’ “Light My Fire.” My parents ended their marriage in the late ’60s. This song gave me an escape. I’d listen to it over and over again and it took me to another place: “Girl, we couldn’t get much higher. Come on baby, light my fire.” I was still a virgin then and wondered, Can a girl really light you on fire during sex?

Van Morrison’s “Brown Eyed Girl.” When I was 16, I followed my brother Kyle’s lead and joined the Los Angeles Police Department’s Explorer program. Every Saturday for eight weeks, I had to get up at 5 a.m. to make it to the Academy for training. The radio alarm was set to jolt me awake, and I liked not knowing what song it would be: Rod Stewart’s “Maggie May,” Isaac Hayes’ “Shaft” or maybe this one, “Brown Eyed Girl.”

Eagles’ “Take It Easy.” In 1972, my Explorer troop traveled to Europe for a month. The official agenda was to learn from other police departments. The unofficial agenda was liquor and women—nirvana for a 16-year- old boy. After a few beers, a couple of the guys would break out guitars and play this song on a street corner. I’d accompany them (poorly) on my harmonica. To our surprise, passersby would drop coins in the hat, ensuring beer money for the next few days. This was also the trip where I lost my virginity to a very professional woman in Austria. I vowed to return one day to find it.

Elvis Presley’s “The Wonder of You.” In the mid-’70s, realizing I was never going to be a policeman, I took off with my brother from California on motorcycles. We traveled for two years with stops to avoid bad weather and to make money. Our destination of choice was Daytona Beach, Florida, where our cousins lived. One of them, Freddie, was accustomed to using his musical talents to pick up girls. We joined in. I honed my impression of Elvis Presley and even won a talent contest or two gyrating to his songs. It was a seminal moment when I realized that timidity wouldn’t win over girls. I changed overnight.

Johann Pachelbel’s “Canon in D Major.” How can anyone possibly listen to this classic and not be moved? Were my musical tastes maturing or was I still just trying to impress the ladies?

Nat King Cole’s “Our Love Is Here to Stay.” This was “our song” at my wedding to Robin in 1989. Sappy? Perhaps. But you bet it was sweet.

Antonio Vivaldi’s “The Four Seasons.” On a thunderous, stormy night in Venice, on our honeymoon, we ducked into a church near St. Mark’s Square. We listened in awe as the musicians made this orchestration come alive.

George Strait’s “I Just Want to Dance with You.” I love this song’s simplicity. It compelled me to lift my new baby girl in my arms and dance her across the room every time it came on.

Green Day’s “Good Riddance (Time of Your Life).” I was fortunate to have a recurring role on Seinfeld as Tim Whatley, the gang’s dentist. I appeared in some iconic episodes, such as “The Yada Yada.” This song played at the farewell wrap party while clips and outtakes of the nine-year run were shown.

They Might Be Giants’ “Boss of Me.” This was Malcolm in the Middle’s theme song. That show changed America’s view of the modern family, and the experience changed my life forever.

Jack Johnson’s “Taylor.” My daughter’s name is Taylor, so this one is a must for obvious reasons.

Jason Mraz’s “I’m Yours.” What I love about this song is not just that it affects me, but that it makes my girls sing and dance. There is joy in the world.

Israel Kamakawiwo’ole’s “Somewhere Over the Rainbow.” I first heard this evocative cover at a graduation ceremony when my sister, Amy, received her master’s degree, a huge achievement considering our childhood. In a quiet moment, close your eyes and listen to this transcendent song. You’ll have the feeling you’re no longer in Kansas.