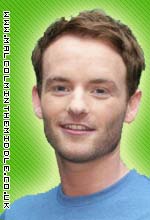 Christopher Masterson (Francis) star of Malcolm in the Middle has split from girlfriend Laura Prepon after 8 years.

“Sex and the City” hottie Jason Lewis was seen out with a newly single Laura Prepon, who dyed her long hair blonde from the trademark auburn color she sported on That 70s Show. Prepon is no longer with Scientologist Christopher Masterson, and Lewis was seen whispering in her ear and looking quite friendly with her at some Kentucky Derby parties: