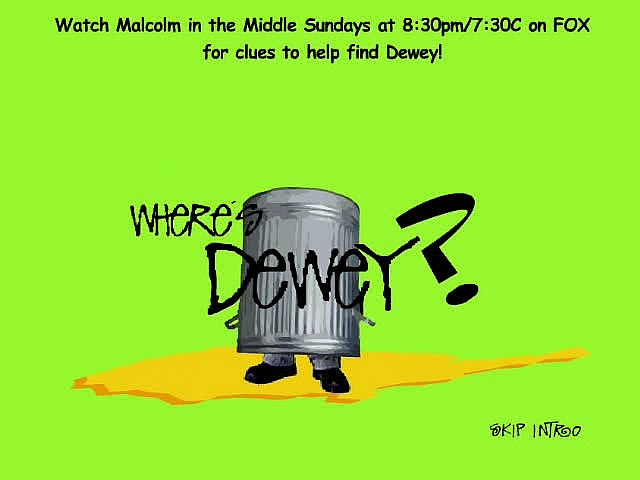 During the summer of 2000, Fox Television, sponsored by Kellogg’s Rice Krispies and Corn Pops, ran a Where’s Dewey? campaign, to capitalize on the Season 1 finale cliffhanger, which showed Dewey getting lost in some strange town after chasing a red balloon out in the streets.

There was an official Fox teaser website with this theme before the start of Season 2 at the now defunct site www.wheresdewey.com.

Thanks to the Internet Archive Wayback Machine, the introductory Flash animation of this site survives, and we have revived it here as a video:

It was also referenced in a great Entertainment Weekly article, from which this quote is taken:

When we last saw the little guy in May’s season finale, he was chasing a paper bag down a random street after his babysitter, guest star Bea Arthur, suffered a heart attack. (Interestingly, Arthur’s character was originally going to kidnap him, but when Fox became skittish about promoting the story line, the producers changed it to Dewey wandering off. ”Even for us, it’s probably not in the best taste to make light of child kidnapping,” notes [series creator Linwood] Boomer, ”so we killed Bea Arthur instead, for the good of America.”) All summer, the net pumped a ”Where’s Dewey?” campaign, which revealed snippets of the sweet tyke wandering all over the country. Alas, trying to glean any hints from the cast as to his whereabouts was about as easy as persuading Survivor contestants to reveal the million-dollar winner. Witness our chat with boy wonder himself, 9-year-old actor Erik Per Sullivan.

Will you tell me if I give you a really yummy candy bar?
[Leans back in chair, smirking] Nope.

Whaddaya gonna do? The kid is good.