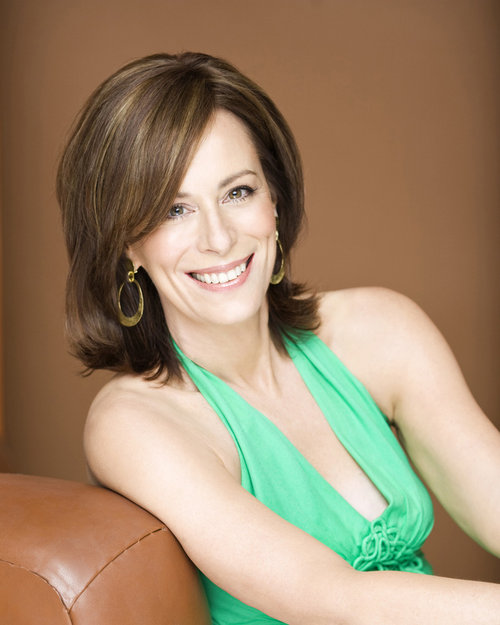 Jane Kaczmarek (Lois) was recently interviewed by Celebrity Baby Scoop about co-parenting and how her divorce with Bradley Whitford has affected her relationship with her children.

Interestingly, she seems to be fairly content at the moment to be having a break from the acting business to look after her children and participate in her community.

Jane Kaczmarek wants you to have the clothes off her back….literally! The lovable TV mom from Malcolm in the Middle sat down with Celebrity Baby Scoop and talked about her charity auction on Clothes Off Our Back, how her three children are doing, and how she finds strength in Buddhist wisdom while co-parenting with her soon-to-be ex-husband, Bradley Whitford.

JK: “Clothes Off Our Back started doing online celebrity auctions for selected charities every year. We would do a local charity, national charity and international charity. Feeding America approached us with the idea of doing an online yard sale of celebrity stuff. Clothes, shoes, bags, etc. used and worn by celebrities, and 100% proceeds go back to Feeding America.

To get involved, you just log on to our site and bid on your favorite items through May 18th. There are some really fun things: Dana Delaney’s Desperate Housewives dress, Courteney Cox’s BCBG Girls tank tops, skirts and sweaters, David Arquette’s golf bag, Alison Sweeney’s dresses and much more.

Courteney Cox and David Arquette are very active with Feeding America so they’re always very generous. There is so many children in need and so many fabulous clothes and items celebrities might never use again. The buyer gets something very nice and the money really goes to a great cause.

Clothes Off Our Back will always have auctions going on. I’ve always said about Hollywood that there are three seasons, mudslides, fires, and award shows. There are always great events going on on that we can grab some celebrity items from. People like to have a little bit of Hollywood. We started with evening gowns and tuxedos and when the economy changed, we added smaller items like dvds and books so we have something for everyone.”

CBS: What are some of the other charities that benefit?

JK: “This year, we work with Feeding America, the largest food bank in the U.S., Hope North, a school and rehab camp for child soldiers from wars in Uganda and Malaria No More. Malaria is the number one killer of children in the world and just $10 buys one net. So you look at a pair of David Arquette sneakers for $40 and that can go toward 4 malaria nets and save the lives of 4 kids. We also support the Mattel Children’s Hospital here in Los Angeles, fighting cancer and other catastrophic illnesses.”

CBS: Tell us why you started the Clothes Off Our Back organization.

JK: “I have always said I’m just a Polish girl from Milwaukee that happened to get lucky in Hollywood. I could not believe that when Malcolm in the Middle became so successful and when my husband’s West Wing was so successful that we got so much stuff. We would get so many clothes. Designers would make something and hope that you wore it and then it was archived as they say.

Many times you were just photographed wearing it and then it that was it. I could not believe how much free stuff we received and then it was just wasted. So we came up with this idea to sell it online. An auction where we could do something with all this bounty and give the money to charity.
I have three very healthy children that are never going to have to worry about schooling or being hungry and there are so many children in the world confronted with that every day. So I thought it would be a good way to raise money for those less fortunate children.”

CBS: Speaking of your children, you are mom to three kids: Frances, 13, George, 10, and Mary, 7. How are they doing? What are they into?
JK: “That was just George calling from school. There is an assembly today and he’s in the choir which is performing. He was in a panic because they were supposed to wear a white button-down shirt and he doesn’t have it. So we need to drive it over. My oldest is involved with Girl Scouts and we just went to San Francisco for a Girl Scouts bridging ceremony. They bridge from being juniors to cadettes. We all walked over the Golden Gate Bridge together. My youngest, Mary Louisa is 7 and in the first grade. She’s just in love with life. Everything is an exciting experience when you’re 7 years old. They’re doing just great, thank you.”

CBS: How are you doing as a single mom to three kids, do you have time to yourself?

JK: “My ex, or soon-to-be ex (the divorce is not final yet) is in Texas doing a TV series. So he’s gone and I empathize with single mothers. It’s just a lot to schedule between baseball, girl scouts, piano lessons and ballet. It’s extremely time consuming but I love making supper and having everyone in the kitchen at night. And I love being there when they wake up in the morning.
Malcolm was a great show it was on for a long time. It was a lot of hours and I had two of my kids while doing the show. I am just very grateful that I can be around a lot now and take care of them and our auctions for Clothes Off Our Back. I just ran a pilot that did not get picked up so the bad news is I don’t have a job, the good news is I get to spend more time at home, which makes me very happy.”

CBS: What is it like now that you are co-parenting with your soon-to-be ex-husband Brad Whitford? Do you share custody and have you been able to create a harmonious system?

JK: No, not yet, we hope to though. He has been gone since January and he has been coming back every other weekend and has the kids. But since he has been working in Texas, they are really with me. For right now that is how it’s working and you always have to put the kids first. We’re still in the same neighborhood, they walk to school and they have the same friends. I always say we are just a family that lives in two different houses so there will be a lot to figure out when he comes back.”

CBS: Do you have any advice for parents who are co-parenting with their exes?

JK: “Be as flexible as possible. I have found that it really doesn’t make much difference at the end of the day what caused the divide. Children pick up on how well the two of you are getting along. So even if you feel you are completely justified to be mad at the guy or vice versa, it just causes them so much pain to sense that between you. They love both of you and anything you say or do to put the other one down causes just the opposite to happen and just comes back to slap you in the face.

There is a Buddhist thing that a friend told me about which is that Buddhists believe in reincarnation and at one time everybody was each other’s mother. What I mean by that is my soon to be ex-husband, according to Buddhist beliefs, was at one time my mother in another life. It forced me to think about things in a different way. How you would treat your mother if you were going through this with her? I love my mother and I’m very close with my mother.
So, there are times that he gets very frustrating and I get very upset and I try to remember if this were my mother right now, how would I respond to her in this situation? It really calms me down. Everyone’s divorce is different. Brad is a great guy, a wonderful man, a great father. Maybe someday I will understand more of what happened, in the meantime you just have to give everyone the benefit of the doubt. And I don’t think anyone sets out to hurt anybody, I just think that a lot of pain happens and comes from things not turning out the way you want them to. I just think we are all on a journey here and how you behave on your journey is all we need to focus on.”

CBS: What’s next for you? You mentioned you were working on a pilot that did not get picked up. Is there anything else on the horizon?
JK: “Nooo (laughs). I have a house in Connecticut and I love going back there for August. The bad news is the show didn’t get picked up, but the good news is I can go to Connecticut in August. It’s much easier to plan vacation time, that’s for sure. I’ve been acting since I was 15.

Doing Malcolm that long kind of got that out of my system. I won’t travel out of town for work. I don’t like being away from my kids. I like my community. I live in Pasedena which is a beautiful place to live. I’m active in music classes at the Pasedena Conservatory of Music, I’m in a book group that is very challenging and I take letter press at the Arts Armory. I have a very full life.”