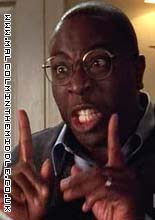 Many actors stumble into their profession, but Gary Anthony Williams was dropped into it by a computer error.

The Georgia-born actor, who plays Clarence Bell and his alter ego, Clarice, on ABC’s “Boston Legal,” had assumed he would wind up going into business before a computer glitch mistakenly assigned him to a high-school drama class. It was love at first sight.

“I had a great teacher, and we did some mime and improv stuff,” Williams says. “Immediately, I thought, ‘This is good.’ ”

After a brief stab at college, Williams moved to Atlanta and began working at the Academy Theatre and the Georgia Shakespeare Festival. In 1988, he joined the city’s long-running improv troupe Laughing Matters, where he performed until 1998, when he and wife Leslie moved to California.

An unsuccessful audition for a role in the pilot of Fox’s “Malcolm in the Middle” led to a plum recurring role on the sitcom as Abe Kenarban, the father of Malcolm’s best pal, Stevie.

“It was a huge education for me in the business out here,” Williams says. “I would see Bryan Cranston being so nice to everybody. He told me, ‘I made a deal, if I was ever the lead on a show, I would not be an ass.’ That whole set was really like family, which is exactly how ‘Boston Legal’ is.”

Williams has his fingers crossed that he will again be part of the David E. Kelley dramedy next season.

“David tapped into something that nobody else really knows about me, which is that I really am a very shy guy” he says. “I get to play around with that a lot, and this is really three characters in one that he has written, so it’s just wonderful.”

Fun fact: He claims to be “the largest vegetarian in California, next to cows.”