The Malcolm cast at the 2001 NATPE conference [video]

Here's a little 'flashback' treat for you, especially the owners of the French and German DVD sets that are being released right now.

Apparently, French journalist Alain Carrazé, who we know from the S2 DVD release, wasn't the only one to interview the main Malcolm cast (minus Jane) on camera at the 2001 NATPE (National Association of Television Program Executives) Market & Conference in Las Vegas. 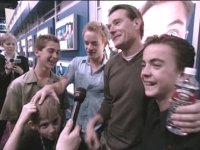 ​
BreakTV.com, "Your Video Streaming Entertainment Magazine", was also on hand for a brief chat.

Listen how Bryan Cranston calls NATPE "The National Association of Transsexuals and Perversion Exhibitors", and what they have to say about meeting Bob Dylan and Tom Cruise!

See our front page for the video.