The horrible inconsistency with MitM openings

I've been watching episodes of seasons randomly, mostly 1, 2, 3 and 4 and I noticed that the openings either are, in 4x3 with some 16x9 scenes, 4x3 with blur on the sides or 16x9. I'm not sure what went wrong here but why didn't they use one opening for the entire series only?

After all, this is the remastered widescreen edition so this shouldn't have happened.

Good point! Yes, it looks extremely messy this way. The point of the MITM opening credits was always to look random and messy I guess, like the family life shown, but not in this inconsistent manner.

As you know, a number of differently edited intros were used over the years, reflecting the growth of the boys and more recent events, and the original ones were all done in the 4x3 standard format.

Well, I assume it wasn't easy to redo them in 16x9, because of the heavy post-production (colour changes, distortions, added credits), and also because they incorporate a lot of external footage from old TV shows for instance, which was also in 4x3. And in my experience, it's often easier to turn 16x9 into 4x3 than the other way round, because you often get close-ups, for instance, with the foreheads and chins cut off when you remove the top and bottom parts.

I think it must have been laziness or negligence on the producers' part to tinker with it like that. They should have settled for a single type of adaptation, like black bars on both sides (which I prefer), or have the original company redo them completely in 16x9, but that would have been an investment, and as we know Fox has always been reluctant to spend money on older series that may have run their course and are no longer of great financial value.

By the way, you see the same thing happen over and over again in documentaries or newscasts that incorporate older footage in 4x3, or vertical smartphone movies. I often get frustrated by this. Sometimes, the top and the bottom are cut, and the middle is stretched to widescreen, sometimes we get black bars on both sides, or the image may be embedded in a blurry version of part of the same image. Disney even uses coloured bars on both sides now and then, which show appropriate artwork and slowly shift with the action on the screen.

I always prefer black bars myself, because it doesn't leave anything out, and doesn't introduce any distracting elements, but in this case I would have preferred to have them all redone professionally in 16x9.

I just checked the opening titles of various episodes from the official widescreen releases on DVD just to be sure, and I noticed that there are at least three versions of the final car scene from Krelboyne Picnic! 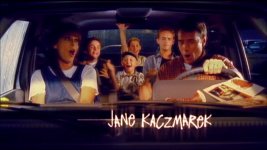 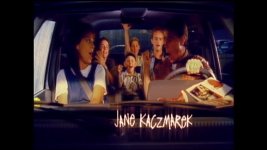 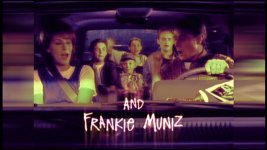